Cambodia, Post 5, the finale. Previous posts, in chronological order: Arriving in Cambodia, Sunrise at Angkor Wat, Angkor Wat: The Small Tour, The Grand Tour. I had the best intentions of not writing a lot about this trip and instead having lots of pictures. Apparently “not writing a lot” is a very difficult proposition for me.  But I do think I have delivered on the “lots of pictures”!

Towards the end of our second day of temple hopping, we were running close on time for sunset with two temples left. The temple our driver had picked out for sunset only allows about 300 people in, and you have to get there around 4pm to make sure you can get your spot. Sunset happens just before 7pm, so there is a fair amount of waiting to be done once you are there.  We decided to skip a formal lunch and just eat the trail mix and snacks we had packed, and we even decided to skip the smaller of the two temples. This left us an hour for Preah Khan. Preah Khan was a temple we had heard of, and we decided we wanted to see it more than we wanted to eat!

Preah Khan was massive. We practically jogged through it and I wish we had more time. This is why it would have been good to have moved the first two “extra” temples to a different day. Skipping one temple and not having enough time at another were not ideal. Not eating lunch was also not ideal, but it was much worse to not have time to take in the temple.  Most of the temples in the Angkor era were originally built to honor Hindu deities; over time, as the state religion switched to Buddhism, the temples were simply repurposed. Preah Khan is interesting because it was originally built to honor both Hinduism and Buddhism. 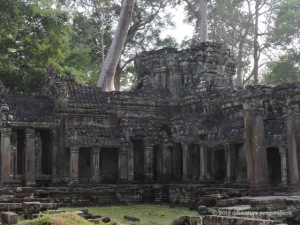 After our relatively quick walk through of Preah Khan, we were on our way to Phnom Bakheng for sunset. This temple is on top of a very large hill, requiring you to hike up a good ways to visit it. It makes for stunning views though and it’s easy to see why it’s a favorite for sunset. By the time we arrived, there were quite a few people already there. Since I am much slower at going up hills or inclines these days, we agreed that Micah would just hike up as quickly as he could and hold a spot in line while I took my time and would meet him at my own pace. (As it turns out, when he got in line, he only had to wait about 5 minutes for me to catch up.  So I’m not that slow yet!)

When it was our turn to go into the temple and up to the top, we quickly claimed a spot at the edge of the temple. I stayed put and Micah did a quick scan to see if there was a better vantage point. Then we swapped and I did a quick scan to see if there was a better view. We both agreed there wasn’t, so Micah began to set up the tripod and I went to walk around and enjoy the views from the other sides. When I came back, Micah was taking down the tripod. Apparently tripods are not allowed. We clearly had no idea about this rule, so we were just thrilled to have carried it around all day for absolutely no reason. (We brought it on the trip specifically for sunrise and sunset photos.  Actually, we bought it specifically for this trip for those reasons!) But while I was checking out the view, I spotted a familiar sight in the middle of the jungle. You could see Angkor Wat quite clearly! As frustrated as we both were about the tripod issue, it was thrilling to see it through the afternoon haze and calming to spend a few minutes on the opposite side of the temple from where the sunset viewing was best, and away from the majority of the people.

Watching sunset was tremendous. You have an impressive view of rice fields and Western Baray lake. I had envisioned being able to see the sun drop down into the lake and take some stunning sunset-over-water pictures. The haze that hangs over the jungle, however, put a damper on those plans. The sun dropped into the haze about 15-20 minutes before it would reach the horizon, and at that point the sunset was over for our intents and purposes. The temple guards started herding us towards the exits and we descended the hill in the twilight. 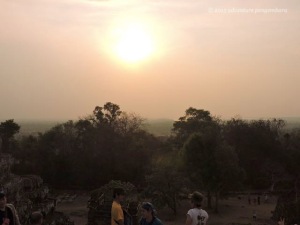 Our driver had told us specifically which tree he would be parked underneath, so it wasn’t difficult to find him among the crowd. The way back to our hotel was crazy with a lot of traffic. Seeing sunset is a popular activity for tourists, in fact, it’s listed as one of the “must do” events. It was even popular with a lot of the locals as we saw families with picnic blankets spread out across the moat from Angkor Wat.

On the way back through the city, we noticed that there were no street lights, or traffic lights, or really any lights anywhere. We got back to the hotel and commented on this to the driver. He didn’t seem too concerned about it, apparently sometimes the entire city loses power. At the hotel, they said that there was an accident- that a car hit a transformer and the entire city was out of power. But the hotel had a generator, so they could still run normally. This was good news! It would be a long night with no AC!  (Though they did have to turn off the generator for a few hours in the middle of the night, so there were a few uncomfortable hours around midnight.)  We went swimming to cool off and then had dinner at the hotel restaurant. We were the only guests eating there, so it was actually very romantic to have a private, candle light dinner, in the beautiful garden setting to end our trip.

We had planned an afternoon flight on Monday so that we could have one last adventure on Monday morning. We thought about visiting one of the museums, or maybe going back to Angkor Wat for a few hours, but my joints were really aching from the whirlwind tours we had done the previous few days. That, coupled with the fact that the power was still out in the whole city, helped us decide to just relax and soak in the pool. We had twinges of “we should be doing something,” but sometimes it’s important to listen to what your body needs and just take a break! (That’s true for all travelers, by the way, not just the knocked up ones!)

Overall, we loved our time in Cambodia and will probably return at some point in our lives.  We saw a lot, but not nearly everything that we wanted to.  It’s worth spending a good chunk of time, a week or so, so that you can take everything in without having to rush.